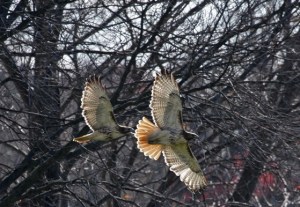 Today around noon when outside with Wyatt Earp the Boxer, I was standing and waiting for him and there was sort of gentle thumping over my head. I felt something overhead….and when I looked up and didn’t see anything directly above me.  As I scanned the sky, I saw this very long expanse of wings, heard the whoosh-whoosh and I realized I had just been buzzed by a beautiful hawk.  I saw the hawk circling again, its four-foot wingspan large enough to create a shadow on the ground below.  He was in no hurry after coming so close to Wyatt and me, and he flapped and caught an updraft to gain altitude.

Later, while driving to the post office, there were two hawks gliding together above a local farm.  As I and so many other drivers go about their Saturday errands and chores, here are magnificent red-tailed hawks doing one of the things they do best, letting the wind take them where it may. 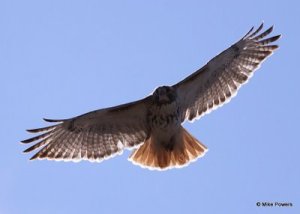 Also known by its scientific name Buteo jamaicensis, the Red-tailed hawk is one of the most common birds of prey in North America.

Hawks are visionaries and messengers. As a totem they help to open the higher chakras so that we may hear and see the visions and messages that Spirit and the Universe are always sending our way. There is never a moment when the Universe is not trying to get a message through to us but we are so often too busy or unaware of what it is we need to be watching for! Hawk helps us to not only be aware that we are receiving a message but how to interpret them. The realm of symbols is also the realm of Hawk for Hawk is able to soar high above the earth to soar on the breath of Spirit, to commune with Spirit and thus understand through the intuitive level what the message means and with their keen eyesight, how to implement it once they return to earth through seeing the broader picture below.

Many of the messages Hawk may bring are about freeing yourself of thoughts and beliefs that are limiting your ability to soar above your life and gain a greater perspective. If one remains earthbound, then the possibilities of life are limited.  It is this ability to soar high above to catch a glimpse of the bigger picture that is one of the aspects of Hawk medicine that makes it so valuable: If one is undergoing a difficult passage to know that just over the next hill is freedom and liberation if one keeps going can be a Godsend in supporting the person to keep moving forward. Likewise, if the path is not appropriate, Hawk Medicine can alert one to this and point out a far more favorable path.

Hawk medicine unites Heaven and Earth. Because of their ability to soar, they are able to reach up to the heavens to extract needed information and bring it back to earth. Much of this information is also very practical for use on a daily basis. It is not only higher concepts or ideas that are relayed, but also information we need to make our material or mundane lives more prosperous and fulfilling. For those who have difficulty attracting financial well being due to false or negative beliefs about money and success, Hawk can help to understand the true spiritual intent and purpose behind money and guide one in establishing new beliefs that are more joyful and abundant in nature.